What is High Intensity Training (HIT)?

High intensity training (HIT) is a form of resistance training that uses high levels of effort or “intensity” with a variety of movements, to burn calories and build muscle in shorter, more intense periods of time. When HIT appeared in the 70s, it was described as “train harder, but briefer.”

The most basic principal of this exercise is simply OVERLOAD. In order to stimulate muscle growth, you have to overload the muscle with a greater force than it is used to.  Therefore, the greater the load and more intense the exercise, the more effective. 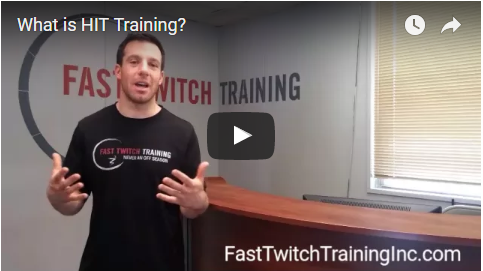 HIT training is best executed with all-out efforts—which means effort to the point of failure without for breakdown. High intensity training methods vary with regards to the specific style, speed, and number of repetitions performed, as well as the number of exercises and frequency of workouts.  But all HIT workouts emphasize working as hard as possible.

Train Briefer
In order to train briefer, I always say you have to think of high intensity training in this sort of way: The harder the workout is, the greater the effort, the shorter the workout must be to avoid overstressing the body. Therefore, a HIT workout would typically last anywhere from 10 to 30 minutes.  The greater the effort put into a workout, the shorter the workout must be. High intensity training workouts typically require around 30 minutes, and some “consolidation routines” may take fewer than 10 minutes to complete.

Almost all HIT methods involve only performing one work set per exercise.  Although the majority of research shows no significant difference in effectiveness between single and multiple sets for improving either muscular strength or size for the majority of people, a few high intensity training methods prescribe two or three sets for some exercises.

High intensity training methods can include as few as three different exercises or as many as 20 different movements. As for the volume, this can vary based on age, sex, genetics and other lifestyle factors and overall goals.

Train Less Often
Intense exercise places a significant amount of stress on the body. Exercising too frequently, without allowing the body adequate time between workouts to recover, will eventually lead to overtraining and a lack of progress.

Most people on HIT program generally should train only three times per week with at least one day off in between in order to make sure overtraining does not occur. This number can decrease to two days per week for older people or people like myself who do not recover as quickly as other people. If you have other types of exercise in your routine, you can certainly continue with that class or training session, but you may want to schedule them on a day without HIT training.

The following are general guidelines for high intensity training from Drew Bayes. Keep in mind the specific volume and frequency of training and exercise selection should be modified to suit the individual, based on level of conditioning, response to exercise, and goals.

–Training Frequency:  Beginners should perform no more than three workouts per week on non-consecutive days. Advanced trainees should work out less frequently, not more.
-Training Volume:  Perform between two and twelve exercises addressing all major muscle groups. If a higher number is performed, limit the total number of compound movements to no more than half.
-Number of Sets:  Perform only one set per exercise.
-Number of Repetitions:  A wide range of repetitions can be effective.
-Progression:  Increase the resistance used during an exercise by approximately five percent whenever you are able to complete the highest number of your repetition range in strict form.
-Repetition Speed:  Move slowly enough to maintain strict control over the movement and to be able to reverse direction smoothly. Avoid fast, jerky movements.
-Range of Motion:  Full-range, partial-range, and isometric training can all be effective

Our KEY Tips for YOU: What is HIT?

H.I.T. training was developed in the 70’s and is a great way to get the most bang for your buck, but there is a certain level of ability that needs to go along with it.