The point of this is not to brag, I hardly did anything amazing.  I just felt that if I could highlight that even though I have always been an athlete, a gym rat, educated on the finer points of this field, dedicated to the process, getting better does not come without hard work, consistency and failures.  I am proud that I am 37 and still getting stronger than I was at a younger age.  I have no reason to believe that this would change unless I otherwise decide to allow it to.

Today should have been a glorious day, but it was business as usual.

About a year ago today I hit a PR of a 400lb sumo deadlift for a 1 rep max.  At the time that was a very big deal for me.  I will say, that there are many people younger and older than me, male and female who weigh less, and can lift much more.   However, for me this was a big number to hit.  I am not a powerlifter but I like to incorporate the movements.  I wanted to continue and just see how high I could go, but, I also hit a funk with training.  It was the winter time, summer basketball just ended and although I love the gym it’s not the end all be all with me.  I enjoy working out so I can apply it to athletics.

After some thinking I decided to learn Jui Jitsu and boxing.  I started learning Jui Jitsu in my 20’s and always wanted to get back into it, however I just made excuses. I decided to, and you can overcome your limitations.  I am too old, I don’t have the time, it starts too late at night, I will get hurt, blah blah blah.   Rather than make excuses I decided to just jump in and do it.  I could always stop.

Now my schedule included lifting 4-5 days per week as well as adding 4 nights per week of martial arts/boxing.  I had two different goals, one in the weight room which revolved around hitting strength and performance goals and another that strictly deals with performance, conditioning, and competition.  Lastly, I found very quickly that I also had to manage my sleep and eating much differently.  I quickly found that I was placing too many demands on my body in a weeks’ time.  In addition to this, martial arts had me up to 11p.m.  I have to wake up around 4-5a.m. for work every morning.  I was asking a lot of my body and I could not handle the demands, but I was trying to force my way through it.

As the months went by I found that all my weights drastically declined, my strength was down, my body weight was dropping quickly on the scale, sleep was poor and my body was just overall struggling to hang in.  It’s funny, when you are in the moment you don’t recognize how much your mind and body are fighting against the grain.  The whole purpose of working out is to enjoy it and always feel healthy.  This was not really the case at that time.  I was just trying to cram it all in and get the same results even though the results were obviously not happening.

I needed to make a change in order to allow my lifestyle, body and mind handle what I wanted to do.    I went to the drawing board and tried different angles, different programs and documented what worked and what did not.  I played around with sleep and diet.  This went on for months,  and I mean months.  I have been in this field for quite some time and have had to program for many different things, but for whatever reason this was new to me and I could not find the solution.  Ultimately, I took out all the fancy stuff in my schedule, I pulled back on my expectations for working out and even how I approach martial arts.  I needed to look at the long term which I preach all the time, but that can be hard to apply when you want the result in that moment.

I stripped down my weights and started over.  I took about 2 weeks off from working out and just stretched to reset everything.  Just to highlight how quickly my body was rejecting my training at the time, my once 400 lb sumo deadlift which I worked about 5 months for dropped to about 225.  That is a lot of work just lost.  However I could only move forward, and after all these goals in the grand scheme of things do not mean anything.  I am not saving the world, but it meant something to me.

I have decided to hit the gym only 3 days per week to gain more rest which I needed.  I cut back to only 4-5 lifts per workout day with ample rest in between.  I increased my sets to 4-5 sets as opposed of doing more lifts and less sets.  My focus was now on performing all out reps and maximum recovery.  I planned nap times in my afternoons if I had the time to counter the lack of sleep during the night (which is not really a good thing but it was my only answer).  I lifted for 4 weeks straight in a rep range of 10-12 and then the 5th week I took off or deloaded.   The next 4 weeks I lifted reps of 6-8 and every 3 months I took a week off from martial arts.  Lastly I increased my caloric intake which was probably the hardest thing because most of the time I didn’t mentally want to eat, but I knew my body needed the calories in order to recover.  So now I made a deal with myself, any time I wake up in the middle of the night I have to get out of bed and go eat a small meal no matter what time it was.  1:00a.m., 2:00 a.m., whatever.  I had to eat and make a meal.

I slowly but surely noticed that I was sleeping better, lifting more, and performing better in martial arts not to mention I had more energy for daily life and my job.  It has been about a year, maybe 2 months shy of it.  About a week ago I dislocated my big toe and I broke and dislocated my small toe in martial arts.  I went to the gym 2 days later and I still sumo deadlifted 400 lbs for 6 reps with a broken toe.  Again, I don’t view this weight to be a lot in the world of sumo deadlifts, but in my world, hitting that number again and doing it for 6 reps now all while doing martial arts, my body is working better for me  today than it was a year ago. 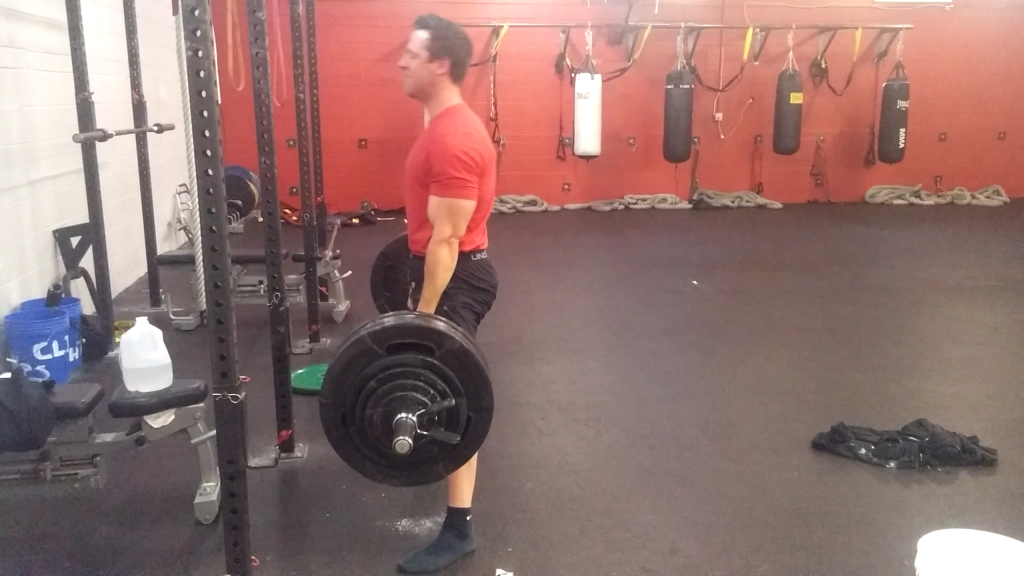 WHY WAS THIS NOT A BIGGER MOMENT?

This should have been a huge moment right?  But I planned for it.  I waited patiently for it.  I let it come to me.  I didn’t force the issue.  I never took a day off or missed a beat from laziness (surely I took a day or two when I needed an extra recovery day).  So when I hit that number I was proud of myself, but really it turned out to be just another training day.  It was more about that little 1 year journey than it was about reaching the goal.

The point of this is not to brag, I hardly did anything amazing.  I just felt that if I could highlight that even though I have always been an athlete, a gym rat, educated on the finer points of this field, dedicated to the process, getting better does not come without hard work, consistency and failures.  I am proud that I am 37 and still getting stronger than I was at a younger age.  I have no reason to believe that this would change unless I otherwise decide to allow it to.

Make your own decision.  Plan for your own moment.  Start your journey by joining one of our many classes.  Or maybe you prefer to train one on one.  Whether you want to get stronger or leaner.  Whether its increased mobility or increased cardiovascular capacity.  Whatever your goal is, come join us and we will help you get there!!!